The problem of the peculiar cycle of failure.
Exchange 2010 no longer generate an automatic response (AutoReplay Outlook Out of Office). In Outlook 2010 does not also appear in the mail tips for absence.
There was no problem with setting OOF via Outlook and OWA.
Proved to be helpful to restart the Exchange Mailbox Assistants Services on the server.
The problem is basically trivial, but maybe someone will save time. The more that in Google for similar problems przypadu meets reconfiguration proposals and EWSa Autodiscover.
So before we start all over again to configure all the paths WebServices supported by the Exchange, we first try to restart the Exchange Mailbox Assistants service, perhaps so that we save a lot of time.

The solution can also be an additional dismount the database and mount it again.

In the case of DAG environment, just for a moment change the active database to another located on another server.

Console Web-word Exchange Administration Center is available in Microsoft Exchange 2013 Preview, we can start typing in the browser to the Exchange server:

When you start the console found in the sections such as:

For Microsoft Outlook 2013 was released a hotfix that emerging problem while working with the tool Cleanup Tools.

Once in Outlook 2013 we add the mailboxes from the Exchange server online and select empty trash or run Cleanup Tools, we lost all emails, calendar and contacts forever. Outlook does not remove all deleted items only but also from other folders.

This amendment was notified of thanks to the many users who encountered this problem. As you know this is just the preview version and each of us has the opportunity to participate in its improving by selecting the icon in the upper right of the year (smiley face or sad), then we can pass on their observations on the operation of Outlook 2013.

Updates can be downloaded from the following links:

Before installing the role of Client Access Server (CAS), we must remember that the firewall on the server-u add an exception for port 139, the rules Inbound.

Installation using the CMD does not differ much from the installation of Microsoft Exchange 2010.
The command line run the course with elevated privileges (Run as Administrator).

The new version no longer uses Setup.com but Setup.exe command syntax looks like this:

Recently, Microsoft released Microsoft Exchange 2013 Preview which we covered in our blog.

The new edition of Exchange Server also get a new tool to manage the Exchange organization.
This tool is called EAC or Exchange Administration Center and combines the consoles ECP (Exchange Control Panel) and EMC (Exchange Management Console).

Forum is located at this link: 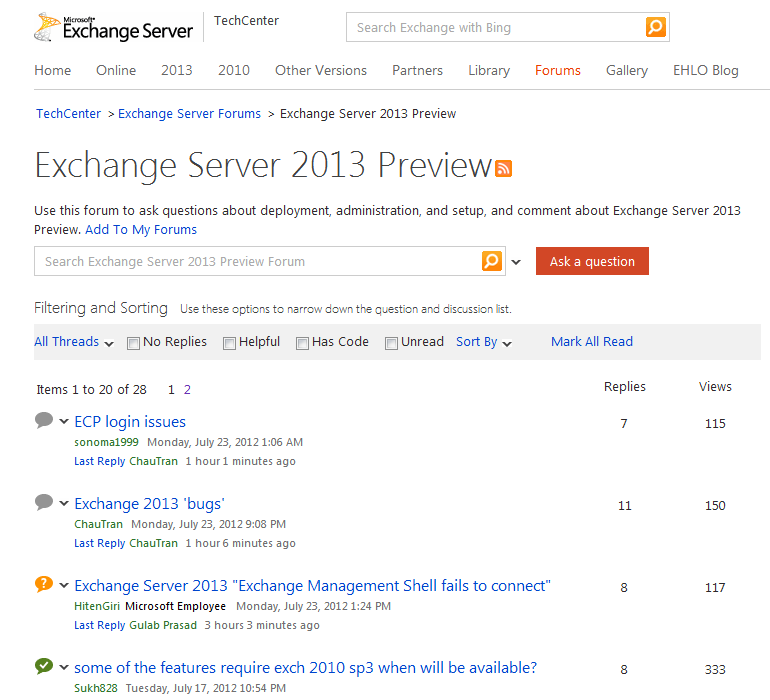 Microsoft Exchange 2013 Preview can be downloaded here (it takes about 1.5 GB).

Exchange 2013 Preview can be installed in an environment where the level of the forest is at least Windows 2003.

During the installation of Exchange server roles, it is recommended that you first install the CAS role (Client Access Server), and MBX (Mailbox Server).

The network environment must support IPv4, IPv6 is also supported but may not be such a situation, we installed the Exchange 2013 Preview in the environment that only supports IPv6, the installation fails. So far we are probably not in danger.

As previously mentioned on our Blog, Exchange 2013 Preview does not work with Exchange 2003!

When you install Microsoft Exchange 2013 Preview you can find a few problems.
Those of you who have yet to be installed in advance of the new Exchange can solve these problems before installation.

When you install the first Exchange Server 2013 Preview in the Active Directory forest, you may receive the error:

If someone is looking for Management Pack for Exchange 2010 SP1 to deploy it in your SCOM 2007R2 is rather a moment that is not found.
As it turns out after installing the MP monitor that checks the amount of free disk space for databases and logs, used a script-DatabaseSpace.ps1 troubleshoot.
Unfortunately, the monitor was configured to run every 5 minutes, and had set the timeout to 300 seconds. This caused the monitor in larger environments Exchange does not operate to the end.
In addition, the monitor was set to default parameters for the amount of free space that must be available for databases and logs (25% free space), and these parameters could not be changed.