As usual, we should first install SP3 in test environment, not in production right away, because you never know what to expect when you install Service Pack 3.

Below we show the installation of SP3 for Microsoft Exchange 2010, on the server with Microsoft Windows Server 2008 R2.

What you need to know before installation of Service Pack 3 for Microsoft Exchange 2010:

Exchange servers should be upgraded in the following order:

Also if we have installed Exchange Management Tools we should also upgrade them.

Also Active Directory Schema will be updated when you run upgrade for the first Exchange server.

The CAS server roles that are in NLB, prior to installation should first stop the NLB server on which you want to install SP3.
Run console Network Load Balancing Manager, select your NLB, then server which will be updated, right click on it and select Control Host and Drainstop.
This will cause that no new connections to CAS server will be accepted.
If you need to quickly disconnect all current connections to the server, then select Stop instead Drainstop.

Once the server has no longer any active connections the server will have status Stopped in NLB console, only then we can proceed to install SP3 for Microsoft Exchange 2010.

After installation the update, you need to reactivate CAS server in NLB console, selecting Start.

Updating Mailbox Servers belonging to the DAG can be done without downtime and interruption to access mailboxes.

Installation of Service Pack 3 on Mailbox Servers should be done following: 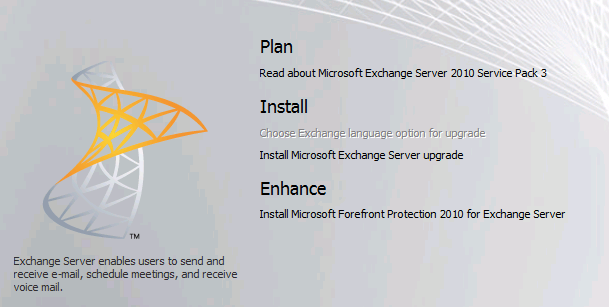 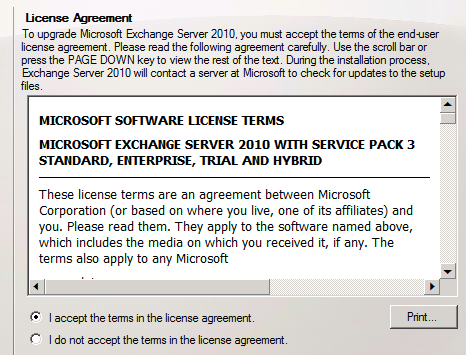 Wizard will check all Prerequisites, when everything is correct select Upgrade.

Installation of Service Pack 3 for Exchange Server 2010 can take a while (about 30 minutes), depends on Exchange environment.